A Life Of Peril And Calling by Kirk Hunt

The Apostle Paul could have had tenure. He had the intelligence, education and connections to establish a Christian Academy and live comfortably. He could have taught and published with zero risk to himself. Instead, he lived a life of peril.

Paul lived a life of danger, risk and suffering for the Gospel. Paul’s history, and scars, gave him tremendous credibility among the Roman legions. Some traditions report that Paul single-handedly evangelized the Praetorian Guard, elite soldiers and body guards of the Caesars.

Personally, I find more comfort in the scarred face of a veteran than the smooth skin of an academic. I like living proof that it can be done, or at least survived. I feel better knowing somebody else struggled, stayed with God, and overcame the same “little problems” I face.

Your scars are a blessing. They give you knowledge and experience you could never get any other way. They give you credibility with people you might not otherwise effect.

Think: The scars, in service for God, are really a blessing.

Pray: “Lord, help me to faithfully persevere in Your calling on my life.”

“Can God Send You?” By Kirk Hunt

Also I heard the voice of the Lord, saying:
“Whom shall I send,
And who will go for Us?”

Freshly purged of his sin, Isaiah was eligible to answer the call. Standing in the very presence of God, Isaiah could not miss the call. Isaiah’s answer echoes still: “Send me.”

Calling is not a spiritual form of conscription. It is a Godly empowerment for a specific ministry or mission. You can thwart a God-ordained call on your life, through disobedience and rebellion.

Isaiah chose the better path. On hearing the call, he responded to God with willingness and obedience. “Here I stand. Give me the assignment.”

Calling is best exercised with joy and energy. What is the difference between an exasperating drudgery and a soul-enriching adventure? Do you respond God’s call as an inconvenient conscription or life-fulfilling opportunity?

There may be difficulties or dangers. They might receive you with gladness or reject you with anger. As much as you want good results, it is more important that you have good obedience. Let God sort out the hearts that hear God’s Word, spoken with skill and grace.

Let God purge you of sin and error. Listen carefully to His heart for men and women. What He asks who to send, raise both hands.

Think: Am I willing to let God purge me of my sin and impurity?

Pray: “Lord, purge me of my sin so I can have fellowship with you.”

“The King’s Purpose” By Kirk Hunt

“Behold, the virgin shall be with child, and bear a Son, and they shall call His name Immanuel,” which is translated, “God with us.”

Mankind, through Adam, had caused the separation from God. As any loving Father would, God made a way to mend the breech. “God with us,” is both purpose and outcome.

Jesus willingly gave up the eternity and splendor of heaven to walk among us. Not just for proximity but to give man back what had been lost. Jesus restored direct access to, fellowship with, God.

Because of Jesus’ sacrifices, we can once against speak directly with God. Because of His dedication to God’s purpose, we have been restored as God’s sons and daughters. Jesus has restored walking with God in the garden.

Perhaps your garden is soft and grassy. It could be that your garden is hard and rocky. What is important is that you know you have a garden, and that God walks there with you.

We work, live and play in the garden where God has placed us. Consider this Christmas that God with us is truer now, than it has ever been. He came and restored the connection. Now He calls to you, “Come walk with Me.”

You are part of His plan and strategy. No matter how much you have surprised others, He saw everything about you, long ago. Take time this season to simply walk with Him. He has a purpose He wants to reveal you.

Think: God’s purpose is to walk with me. Do I walk with Him?

Pray: “Lord, as I build Your Kingdom, help me to enjoy walking with You.” 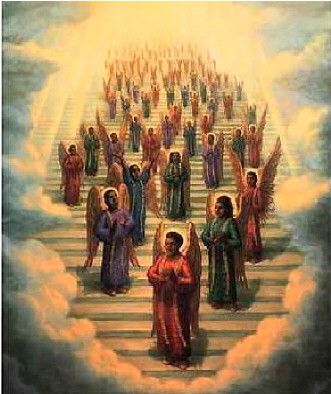 “The King’s Announcement” By Kirk Hunt

And suddenly there was with the angel a multitude of the heavenly host praising God and saying:

“Glory to God in the highest,
And on earth peace, goodwill toward men!”

Humble shepherds witnessed a celebration by the King. Literal angels sang of the birth of Jesus, our Messiah. Scripture does not mention an angelic worship band or praise dancers, but my imagination likes to add them to the scene.

After millennia, evidence of the fulfillment of Genesis 3:15 could be seen by mere men. Since the fall in Eden, sin kept mankind from full reconciliation with God. Jesus’ birth was the (earthly) beginning of the process of restoring the fellowship on humanity with God.

And God celebrated. The long separation of man from God would soon end. Adam’s breech would be repaired by God’s own son.

Like Jesus, you were born for purpose. God has a plan for you and your life. And He will celebrate you in fulfilling the purpose He ordained for you.

The shepherds were not just passive witnesses. The found their way to Jesus and joined the angels in celebration and worship. God’s celebrations are open to any with a heart open to Him.

You too can be an active participant in God’s celebrations. Find your purpose in the Kingdom and begin fulfilling it. Join in with others who are completing the work for which they are ordained.

Follow your calling. Fulfill your purpose. You may not see or hear a choir of literal angels, but you will feel His joy in your heart, nevertheless.

Think: God celebrates the fulfillment of His purpose in my life and others.

Pray: “Lord, as I and others build Your Kingdom, I look forward to celebrating with You.”

“Not Qualified To Disqualify” By Kirk Hunt

And Saul said to David, “You are not able to go against this Philistine to fight with him; for you are a youth, and he a man of war from his youth.”

King Saul was an extraordinary leader, anointed by God. He led the scattered 12 Tribes of Israel through the transformation into a unified nation. He led Israel to multiple victories over its aggressive neighbors, despite their technological advantages and greater numbers. Still, he was not qualified to disqualify David.

Saul is talking to a youth who killed a lion single-handed. David, a youngster, killed a bear. Saul did not know it in this verse, but David was already anointed by God.

Saul had greater position, rank, age, experience, skill and knowledge than David. Still, that did not qualify him to disqualify David. David’s qualifications came from God. A mere king cannot overrule Jehovah-Sabaoth.

Despite his own anointing, David correctly obeyed and respected Saul as king. Later, Saul would illegally, and immorally, seek to kill David. David wisely refused to move against the anointed king of Israel. David understood that Saul’s qualifications came from God and a mere shepherd–boy cannot overrule Jehovah-Sabaoth.

What has God anointed you to do? Are you busy, fulfilling the calling on your life? Be respectful, and obedient, of those God has placed over you. Still, remember that Jehovah-Sabaoth has provided your qualification. A mere man or woman cannot overrule God.

Think: If God has qualified me, no one else can disqualify me.

Pray: “Lord, help me to live out the qualifications You have given me.”

This devotional is a ministry of http://devotionals.cadremenpress.com.

Then Gideon said to God, “Do not be angry with me, but let me speak just once more: Let me test, I pray, just once more with the fleece; let it now be dry only on the fleece, but on all the ground let there be dew.”

Gideon had already met an angel, face-to-face. He also experienced (even if briefly) the in-dwelling of God’s Spirit; a rare thing in the Old Testament record. With all of Israel’s military might gathered with him at Jezreel, Gideon hesitated to engage with the enemy. Despite his intensive experience with God, and an army at his command, Gideon failed to launch.

The miracles of a wet fleece, then a dry fleece were designed to assure Gideon that he was following God’s authentic commands. We can read ahead in Scripture to Gideon’s victory at the end of Judges 7. Gideon had to live through the actual battles and difficulties in order to enjoy the success God promised him.

Do not get me wrong. I have done the same thing. With all of God’s presence and assurance, I have hesitated to follow His command. Despite seeing and knowing much, I draw back because I do not know all.

As God’s people, we are to love and trust Him more than ourselves. We may not always have our own best interests in heart or mind, but He does. God guides human history with one hand while the other hand holds endless power. We can trust His call to launch.

Think: I want the character to boldly launch when God commands.

Pray: “Lord, help me to have the courage and obedience to launch at Your command.”

This devotional is a ministry of http://devotionals.cadremenpress.com.